Last Wednesday was the Inauguration of Joe Biden. While the event is of major significance as we move forward into 2021, something awesome happened that is completely unrelated to politics. Bernie Sanders provided us with the potentially the “meme of the year”.

Last Wednesday was the Inauguration of Joe Biden. While the event is of major significance as we move forward into 2021, something awesome happened that is completely unrelated to politics. Bernie Sanders provided us with the potentially the “meme of the year”.

For those who missed it, here is the original image: 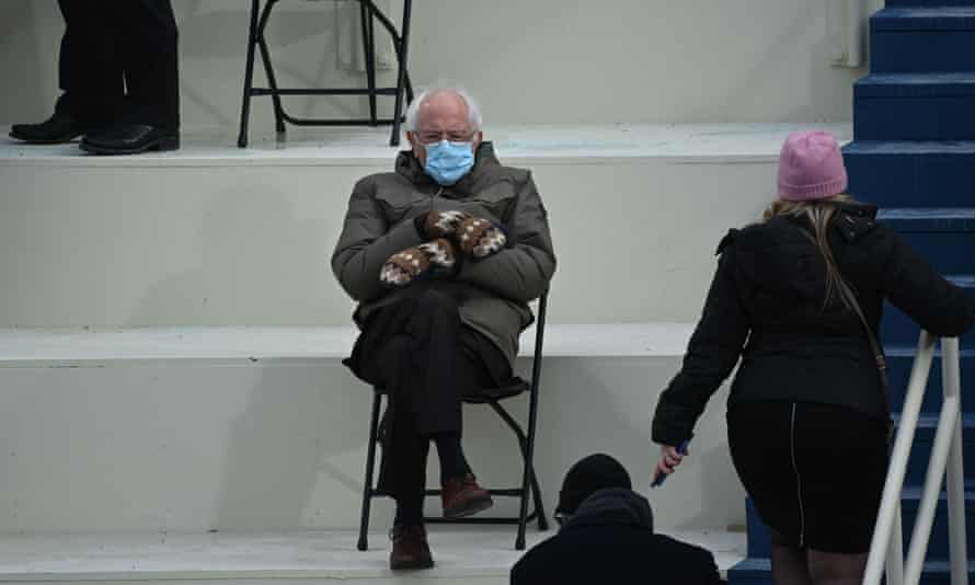 As you can see, it is Bernie Sanders, socially distanced, looking rather grumpy and cold at the inauguration. What he didn’t know (and perhaps nobody knew) is that this image would turn into a worldwide meme, garnering laughs from around the globe.

After scrolling social media, I promptly noticed that colleges and universities were jumping on the meme train, posting hilarious photos of Bernie at iconic places on their campus. The number of memes was frankly overwhelming, and I realized that somebody needed to compile the best ones into a blog. This is that blog.

I spent the weekend scouring social media for my favorite Bernie memes from higher ed institutions. Unfortunately, I didn’t have time to visit every single higher ed institutions Instagram account, so I decided to narrow down the focus to Canadian Universities. You’re probably wondering why I would choose Canadian Universities considering the Inauguration is a US event, but cut me some slack. First off, we’re a Canadian company, and second, there are over 4,000 universities in the USA relative to roughly 100 in Canada. 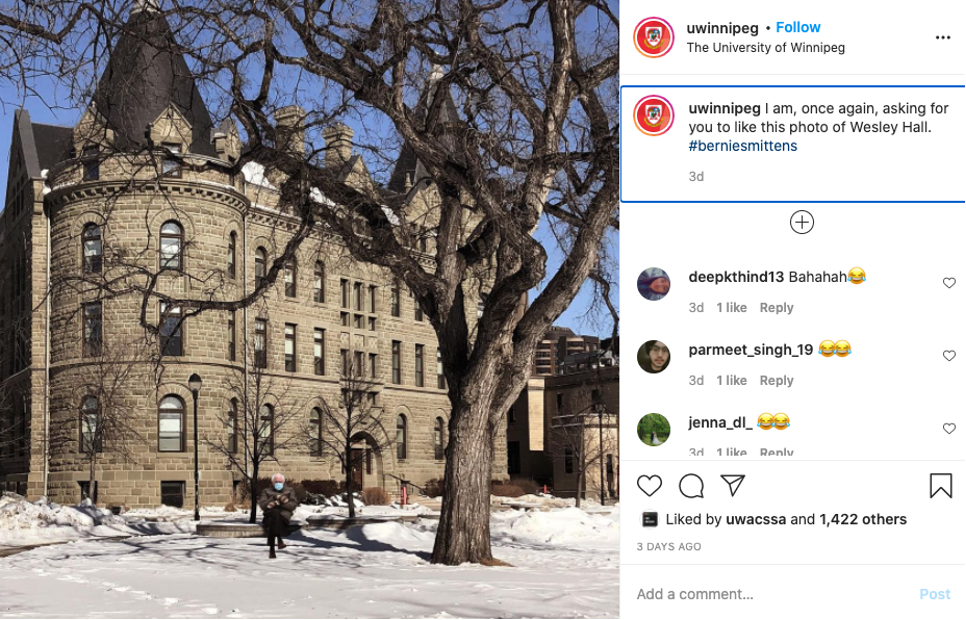 The University of Winnipeg kept it simple, asking for people to like a photo of Bernie in front of the historic Wesley Hall. The photoshop quality is good and you can see the reaction in the comments is overwhelmingly positive. Nicely done @UWinnipeg.

Can I get ‘relatable for $500’. While Algoma University didn’t have the most creative photoshop, they nailed the caption. We’re all sitting here patiently waiting for gyms to reopen, just like Bernie (although I recently read an article that says Bernie Sanders prefers ‘chopping wood’ as his go-to form of exercise).

McMaster fully embraced the ‘meme’ aspect of this whole thing, including a hilarious quote within the image itself. They also managed to start some minor beef with @mcmasteru_memes. If I can tell you one thing, there is nothing I love more than a good meme war. 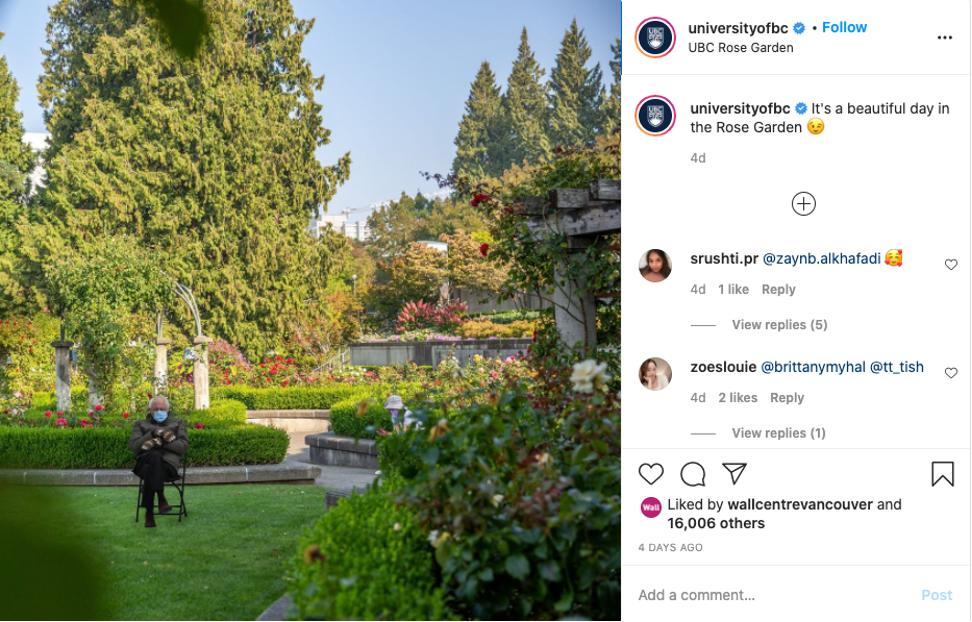 UBC is one of few Canadian schools where Bernie looks overdressed due to the lack of snow. With that being said, the image, colors and photoshop are all really well done. Can we also mention that this photo got 16,000+ likes? Well done UBC. 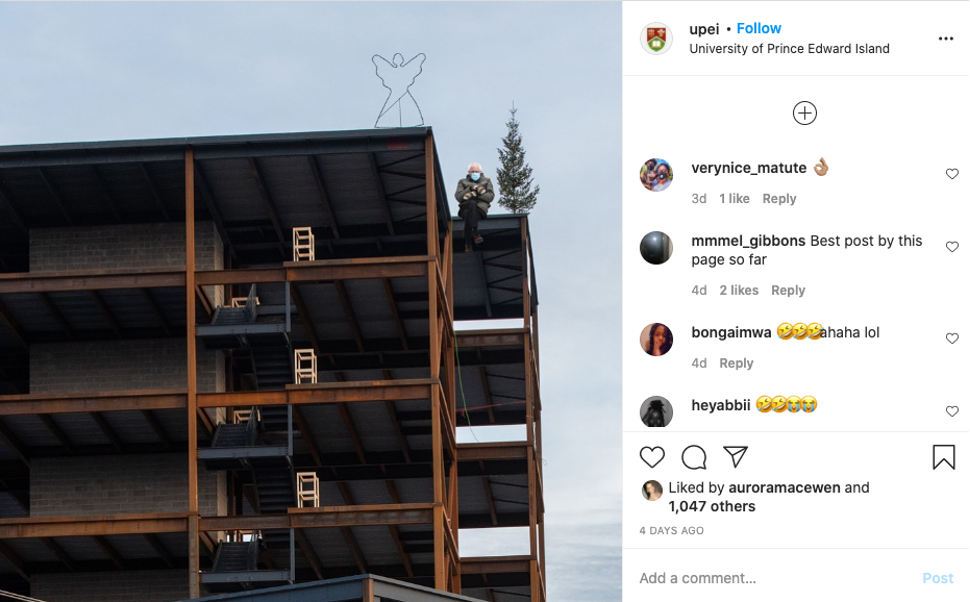 UPEI took an ambiguous approach to this one, simply placing Bernie atop a building alongside a Christmas tree and angel without any context in the caption. As somebody who loves art, I can appreciate the different ways one can interpret this meme. I am a fan @UPEI.

The University of Alberta came in hot with three different Bernie memes. What I personally enjoy most about this carousel of images is the “where’s Waldo” feel as you moved from image to image. Very clever, U of A. 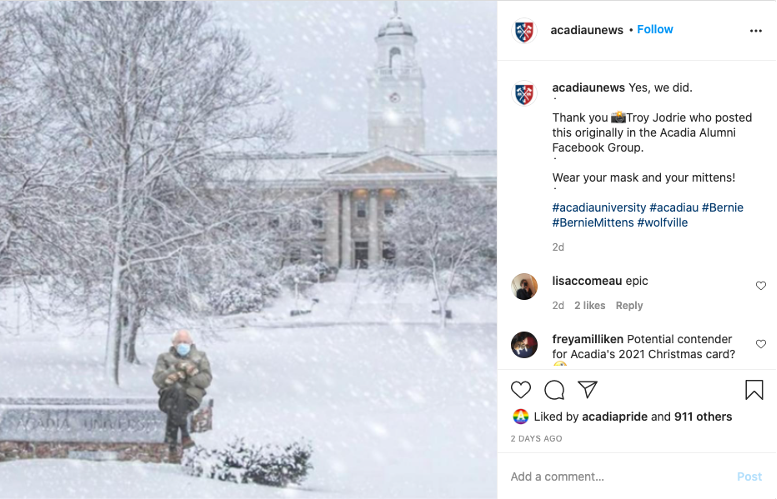 Acadia really embraced the winter aspect of their meme. If Canada isn’t cold and snowy enough for you, they actually photoshopped MORE snow into this image. If that isn’t Canadian, I don’t know what is.

Bishop’s has always been a school open to challenging the status quo. Look no further than their Bernie Sanders meme. Bishop’s took an extremely creative approach to getting involved with this meme, recreating the iconic look while promoting their campus clubs. Cross promotion at its finest! 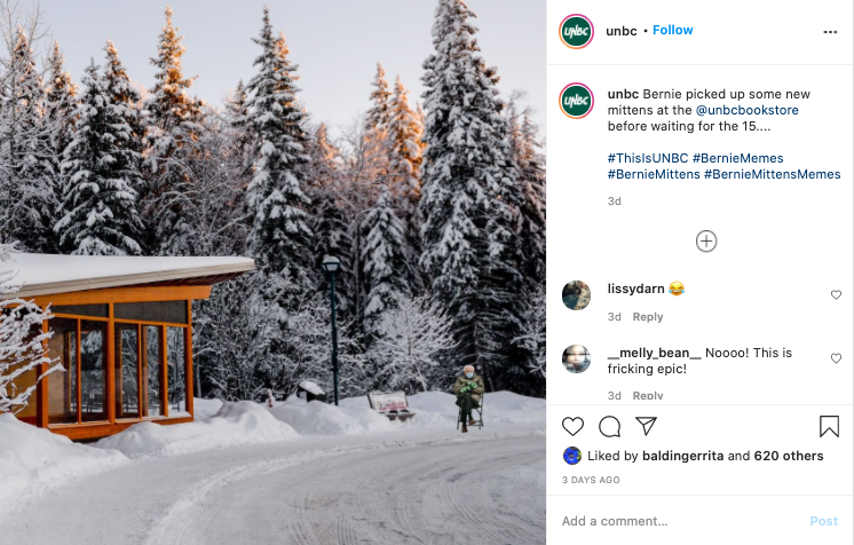 Here we have a snowy edit of Bernie outside the UNBC campus. My favorite part of this meme is the edited gloves on Bernie, highlighted by a clever caption. If I was a UNBC student or alum, I would be sprinting to the UNBC Bookstore to grab a fresh pair of mittens. Hey @UNBC, can I get a pair? 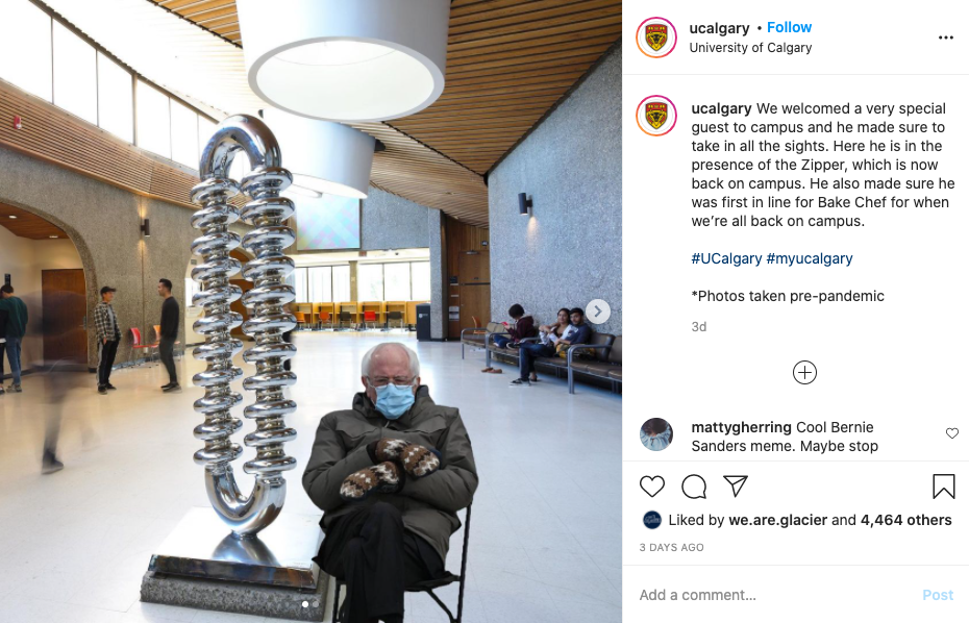 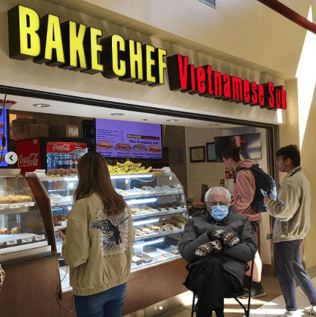 Remember when I said this whole thing was subject to my own personal biases? This is why. Did U of C have the best photoshop or the funniest caption? Not even close. However, as a proud graduate of U of C, these memes fill me with nostalgia, something none of the other memes did. I can’t say I ever thought a meme of Bernie Sanders would bring back memories of spinning the zipper as one last token of good luck before writing an exam, or remind me of the ungodly amounts of Vietnamese Subs I ate during my tenure.  Congratulations U of C, you win.

I hope you enjoyed this blog as much as I enjoyed writing it. More than anything, I love that colleges and universities are jumping in on the fun and getting involved with the hilarity of this whole situation. It is also interesting to note that these posts had 5 to 10 times higher engagement relative to other posts on each institutions feed. It shows that students and alumni can appreciate it when their school has the courage to go off-brand and post something hilarious.

Breaking away from the crowd and separating yourself from the competition